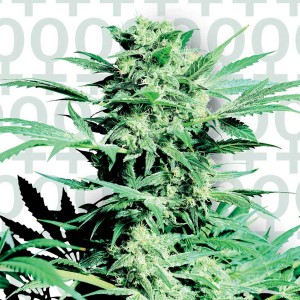 The most powerful member of the Skunk family and therefore one of the most potent Indica-dominant strains ever made available, this very special hybrid is named in honour of the Hindu god Shiva, the Lord of Bhang
Shiva Skunk seeds were an instant hit when released in 1987 as NL#5 x Sk#1. That simple working-title was of great interest to any growers familiar with the two famous parent-plants. A new cannabis strain combining distinct and stable genotypes is always noteworthy event, and that particular string of letters indicated something extraordinary.

NL#5 x Sk#1 offered growers a taste of cannabis cubed - a super-hybrid embodying the two most powerful cannabis strains known at the time. Before being formally named, Shiva Skunk was already building a reputation as the next step in marijuana breeding. Now, Sensi Seeds has taken Shiva Skunk one step further, releasing one of our all-time favourite strains as a uniform, reliable, all-female variety!

Both parents influence the prolific bud structure and knock-down potency of feminized Shiva Skunk seeds. Later in flowering, her buds greatly increase their mass and density and become encrusted with a trademark layer of oversized resin glands, courtesy of the one and only Northern Lights #5. Remarkable hybrid vigour allows feminized Shiva Skunk to out-perform even its distinguished parents in terms of yield and resin content.

Bouquet is musky and dank with sweet-citrus undertones; smoke is thick, expansive and resinous, described as creamy by veterans, sometimes as oily or heavy by novices. Shiva Skunks extreme body-mind potency can have a range of different effects in smokers, making them red-eyed and giggly, or deeply contemplative, or even filling them with energy and a desire for adventure.This is not a smoke to be taken lightly; remember that Lord Shivas primary title is The Destroyer!